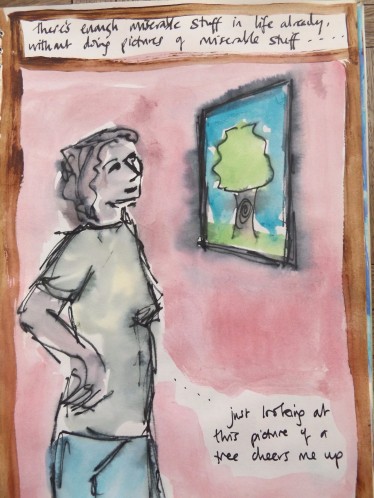 not until we are lost do we begin to understand ourselves

according to my friend the federer fan, i have been trolled. allegedly. i am sitting firmly on the fence in regards to this matter, since i am not at all convinced i understand exactly what trolling is. i think perhaps it has more to do with intention than consequence. like i said, i’m not sure.

i have asked people to make comments on my blog. hits are great. hits mean that someone unknown has taken the trouble to look at it. but comments give it a real relationship to the outside world. it would be vain and dishonest to only approve positive comments. in any case, it is salutary to be reminded just how easy it is to jump to judgement. and to consider the leap of faith required for everyone who puts what they do creatively out into the world.

when i get my knickers in a twist about writing or drawing, i find it therapeutic to bear in mind a few things some supremely, inarguably talented people have said: john lennon said he couldn’t listen to any of the beatles’ recordings without noticing what he’d change about them; leonard cohen talked about how he felt he was scraping the bottom of the barrel. he contrasted his experience of writing to that of other creative people, who appeared to have an abundance of material and inspiration at their fingertips. what he put down on paper was the only thing available to him at that time; and this quote which i’ve heard a lot lately, from various sources, that “inspiration can strike, but it has to find us working” – and now find is attributed to picasso. it is humbling as well as reassuring to remind myself that even some of the most gifted creators of recent time experienced self doubt.

before i started this blog i had no idea what it might be. some friends i’ve spoken to about writing or painting or drawing tell me that they set off with a clear intention, and that the end result turns out as they expected it to. my experience is very different. sometimes when i embark on a picture or piece of writing i have a specific theme in mind. occasionally i know roughly what its conclusion will be, but not how i’ll get there. but mostly the process is a complete mystery, more like launching myself off a cliff blindfold with no idea where i’ll land.

i envy that aforementioned certainty and confidence, and part of me would like to have more idea of what i’m doing, more of the time. but there is something wonderful about the process of mystery. at least, there is when its outcome turns out to be ok. it is exhilarating to not discover the punchline until the end of the joke.

second guessing, imagining potential negative reactions, is fatal. if i heeded all the clamouring critical voices sitting just out of sight behind me, i would edit and edit myself into silence.

i guess all this is by way of saying that the stuff i post here is the only stuff i can post here. that there isn’t an alternative blog on another planet with more temperate conditions where i put different words in a different order, and mean something else.

2 thoughts on “spring forward, fall back”